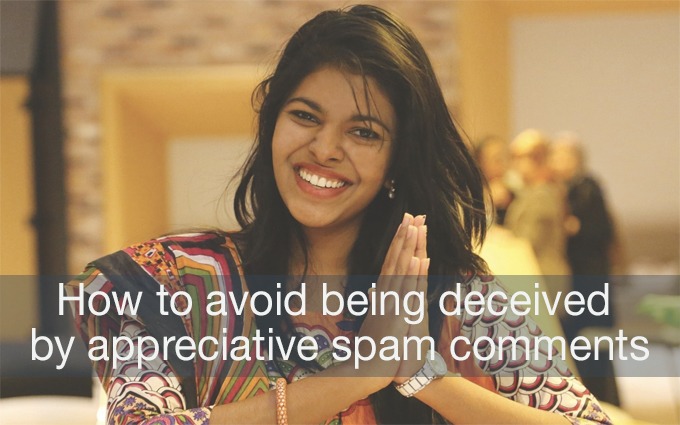 Spammers are a wily lot. They will do absolutely anything to get their comments published.

However, the majority of spammers aren't very bright, or aren't even human at all. You can determine this kind of spam easily from a real comment, in fact they stick out like sore thumbs!

But now and again, especially if the comment has been written by an English speaking human, they produce an appreciative spam comment that may make the uninitiated think twice.

Here is an example from the beginning of my blogging days:

The commenter mentioned the word 'elements' as that is what included in the post's title (Elements of a successful blog). They also extended their appreciation by thanking me for presenting these elements in an understandable way, which was part of my strapline at the time.

Even though this comment is very short, it has enough within it to show the reader has actually read the post.

Here is another one:

Again, the thanks given was intermingled with the various items mentioned within the post (same as above). Even though there are some typing errors at the end, this does not detract from the main focus and appreciation by a valid reader.

This is an appreciative spam comment, though I didn't realise it at the time. Here are the pointers that determine it as such:

So what are appreciative spam comments?

If they mention they are delighted to share your post with their friends, be wary. This is a standard phrase of a spammer. This is not really appreciative at all, as they actually say nothing in the comment that is connected with your post.

They say they have learned several new things from it, but they haven't mentioned what they are. A real commenter would list them and even tell me how they would implement them or what affect they would have on their blog.

Saying this article stands out from others is a spammy ingratiating phrase. Newbie bloggers could easily be flattered by this.

Look at the way the sentences are constructed. I know people are sloppy when commenting, especially if they are using handheld devices. But these look like they've been through Google translator.

Spammers are very good at using the word 'amazed' or 'amazing'. This is not a word a real commenter would use. It is purely to ingratiate themselves with the blogger.

When they say they rarely encounter a post that is as good as yours, don't be flattered by this. This is true spammer speak. Hitting the nail on the head is another spamming phrase.

When they mention 'found this during my search', the appreciative spam alarm bells should be ringing. A real commenter is unlikely to mention this in their feedback.

Again another reference to my RSS. It is easily accessible via my sidebar, so basically they are talking out of their arse. This is a very basic spamming tactic that certainly has no effect on me or anyone else.

Why do we get appreciative spam comments?

A spammers first objective is to get their comment published, so their link is on your blog, and therefore clickable by your readers and indexable by the search engines.

Now they think by being ingratiating through flattery and praise, they will win you over. In the beginning of your blogging days, they will probably succeed. They certainly did with me.

I remember visiting one new blogger who was so excited about the number of appreciative comments he was getting. They were all appreciative spam. The poor thing was getting no traction and no visitors, because the spammer's vile poison was spreading throughout his blog.

Usually really bad spam is totally obvious, and is swept up away by the spam blockers and moderators. But just occasionally one slips through the net, and you have to be ready for it.

Basically, a rule of thumb is if the comment appears too good to be true, it is spam. Real commenters aren't any good at flattery or false appreciation.

What are the main elements of appreciation spam?

Here is an infographic to help you out:

Can you suggest any other appreciate spam features that could be added to this infographic? Tell me about them in the comment box below.