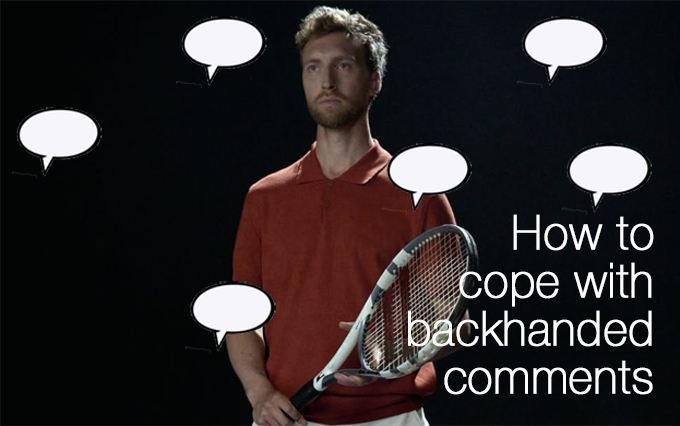 There must be something wrong with me, but I find it very hard to recognise backhanded comments, even when they are aimed directly at me. Maybe my ignorance and unawareness could be construed as bliss, whereas others may view it as stupidity.

I suspect I have received my fair share of backhanded comments over the years, and have yet been oblivious to them. Certainly during my research for this post, I have come across such comments which I find totally ordinary, even with the faux pas highlighted.

However, I am aware that more sensitive and aware people would receive such comments in a very poor light, and be deeply upset or confused by them. Certainly there are instances which younger people would find offensive when I would not.

Backhanded comments are those which deliver a level of praise but are laced with criticism within or behind it. In other words, they blur a compliment with an insult, making the comment less sincere than it was meant to be.

Sometimes they can be quite subtle, disguising the negativity to allow the recipient to register is later. Often the unfortunate element acts as a confusing agent, turning what could have been a flattering thing to say into a more dampened statement, often unnecessarily.

Often they are uttered by insensitive people who fail to think before they speak. This is a common trait, especially in a world of instant delivery, exasperated by real-time commenting on social media. It is all too easy to blurt out the first thing that comes to mind without prior consideration.

Why are they delivered?

You need to consider the person who delivers backhanded comments and their state of mind. Could their actions stem from their unconscious insecurities about themselves? Perhaps their low esteem causes them to lash out with disguised vitriol? Jealous and envy can easily cloud better judgement.

Or, and this probably includes me, they utter backhanded comments without realising what they are. The intent is to deliver flattery, kindness, enthusiasm and encouragement, and yet because of extending the compliment as a sort of endorsement, the result backfires and ruins everything.

It could be because of an utter unawareness of which words cause offence. This is particularly prone to older people using vocabulary to which younger people have attributed a different meaning. In this case I advise keep any compliments to a minimum and as simple as possible.

Just search for backhanded comments and you will find plenty of blogs providing examples. Again be aware of the audience's profile and who these examples are being aimed at. Something like "You house is lovely, it's so cosy and comfortable" can be interpreted as not enough effort has been made to make it look nice.

Again an innocuous comment such as "Your skin looks so much better!" could remind the recipient of how awful it was before. And some are a bit more blatant, such as "You're so brave to wear that!", which implies the outfit actually looks terrible.

What can you do about them?

Apart from actually stopping and thinking about what you are going to say before saying it, there are various techniques you can put in place to make the process of curbing your tongue a bit easier. It does require a presence of mind, however, which is best obtained through working hard at it.

This also includes the simple practice of knowing when to stop. Usually there is no need to extend your compliment to clarify it. Less is more here. Focus on the flattery and leave out any extended reference which isn't relevant or necessary.

However, if you are a recipient of such unfortunate attention, I've created this infographic to visually give you a quick guide in how to cope with backhanded comments:

Sometimes there are reasons for backhanded comments, but you should also consider if they could have been delivered unintentionally. Therefore knowing and understanding the deliverer should make a difference to how you receive and cope with this situation.

There are always some who relish being horrible, and take delight in concocting something mean to cloud their praise. It gives them a sense of power of you, especially if you are unable to respond satisfactorily. You should treat them as a bully accordingly.

But some may wish to say something nice but fall foul from the beginning. They may not know why you are offended, or understand the implication of their words. If they are real friends, their gaucheness and inability to communicate effectively should be taken into consideration.

In all cases, it's best to look things positively. It's not worth dwelling on what has upset you. If the comment was written, analyse which bit was the positive element. If it was said, try and remember if any of it was kind and well-meant, and focus on that.

It is all too easy to direct your attention to the negative content within the comment. This is only natural, as self-preservation is innate and stems from when we tried to survive when living in caves. Bad things were dangerous, and need to be recognised and avoided at all costs.

But it is necessary to turn this on its head and give more attention to the nicer bits. Offer thanks while repeating it to give it more emphasis. This will also take away any attention to the negative areas, and allow others to realise what should be celebrated.

Sometimes backhanded comments may not recognised immediately, and the nasty section comes to the fore later, causing confusion. Whether intentional or not, these unnecessary extensions are which has caused the trouble, aggravation and distress.

If applicable, and this depends upon the situation and deliverer, it may help you to bring the unacceptable portion to the fore (especially if you recognised it immediately). By drawing attention to it, you have brought the blunder to the surface so all can see it.

This will give the person who said it a chance to explain or rectify themselves, if they didn't mean it. Hopefully they will then recognise the error of their ways and not repeat it again. But in some cases oblivion or an inability to acknowledge upset means this may be a hopeless case.

There are always going to be some people who can not only cope with backhanded comments, but know exactly how to respond to them. If you have a brain which is quick enough, and you can think of a suitable backhanded comment in return, you could always try throwing it at the deliver to see what happens.

Certainly this is something stand-up comics have to master. Not only do they need to acquire a thick skin for their profession, they may find it wise to think up a series of retorts to fling back at hecklers hell-bent on ruining their performance.

Another method, if you are clever enough, is to defuse or cancel the situation with humour. This is only suitable for those who are successful at this, or it could backfire. The last thing you want is to look more stupid than the backhanded commenter in the first place!

And then there is always the safer approach of just ignoring everything, the comment and the commenter. Or you could be like me, and be oblivious to them! Sometimes ignorance is bliss, as it makes life a lot sweeter.

The action of ignoring can actually give you more strength and authority than whoever was stupid enough to deliver the comment in the first place. Not rising to aggravation or an attempt to anger is the opposite to the passive-aggressive behaviour demonstrated by the commenter.

Life is too complicated and cluttered to worry about people who want to upset you. Banish it from your mind, focus on what is necessary. They may have failed to understand the implication of their comment, but if they haven't, then they don't deserve to be within your circle of friends any more.

Ready to cope with backhanded comments?

The world is full of unpleasantness and nastiness. This is because it is much easily to think of something horrible than nice. Also as there are so many more negative words available, the brain doesn't have to think hard to find and use them.

It is a good idea to form your own method of coping with backhanded comments, or rearrange your life to lessen their impact or alleviate when they could arise. Talk to your real friends, who don't deliver backhanded comments, to get their encouragement and support if necessary.

Tell us in the comments below any incidents you may have had with backhanded comments. Your ways of coping, situations when they has backfired, or examples you would like to highlight accordingly. We would love to hear from you.