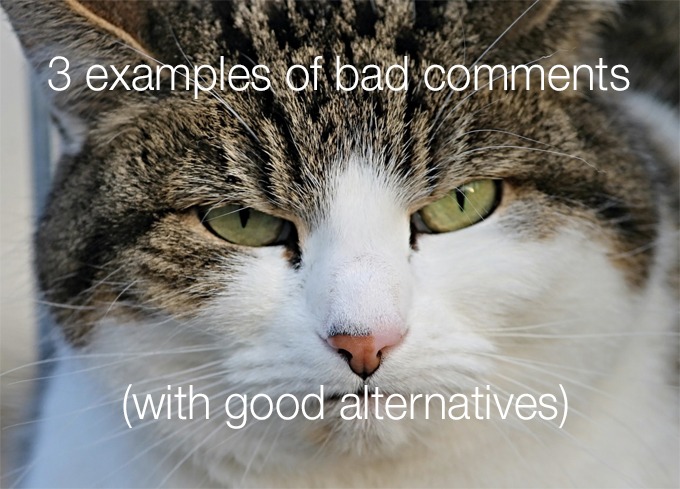 Getting a comment on your blog is really exciting, especially nowadays when they tend to be far and few between.

However, if it is below the usual standard you expect, it can be really disappointing. Surely the reader could have made more of an effort?

The fact is, many readers don't know how to comment properly. This is a phenomenon I will address in another post, but until then, here are a selection of bad comments for you to consider:

The inadequate 'thank you' comments

These kinds of bad comments don't provide any value, let alone a reason to publish it. It isn't contributing to the post in any way. All I know is that the reader has benefited from the content in some way.

The comment below has gone further and said a bit more:

But it is still limited. It does refer to the post's subject, which is good, but it doesn't say how the 'valuable tips' have helped this reader.

Bad comments also don't show proper names. This particular commenter also prefers to hide behind his business name. Considering it is actually an SEO agency, they should know better than to be anonymous. I would have warmed to this better if I knew exactly who the commenter was.

Shafi here has made much more of an effort with his thanks:

First he has got a proper avatar to go with his name. I can see that he is a real person.

He has also linked to a specific post within his blog, that he thinks is relevant. This will give this acceptable link more prominence with the search engines.

Next Shafi confirms a point from my post within his acknowledgement. He then makes a personal statement on how it affects him before submitting his thanks.

The 'not reading it properly' comments

One of the most important things you need to do before you comment is to read the original post carefully.

So many people skim read comments without fully understanding the subject or grasping the point the post makes. This means they either get the wrong end of the stick, or write bad comments that aren't relevant. Like Diego below, who thought my post was about writer's block:

And I had to correct him. The term 'creativity block' was in the post's title, which definitely showed he hadn't read it properly:

I needn't have bothered to publish this post, but I did in the vain hope he would read it again and realise his mistake.

But then Diego was the sort of commenter who wouldn't have bothered to return to see my reply, so he would never have known anyway.

Not a problem, Jo, always glad to oblige!

Spam is submitted by humans rather than robots nowadays (to get past the moderation systems). However, it is easy to recognise a spam comment, because their content not only has no relation to the post, and also follows some simple rules:

Any comment that is blatantly a method for self promotion is spam. These kinds of links are not tolerated. If you want your link to be accepted, it needs to go to a relevant destination that provides a reference that backs up the commenter's point. 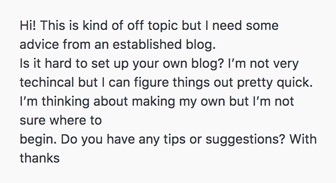 A request for help in the comment section is spam. A real person would search out the contact page to leave a proper message.

You can ask for clarification of a point in a comment, but make sure it is totally relevant to the post's subject and is phrased in the form of a question.

A statement declaring you've joined the RSS feed and that you've shared it on social media is another indication of spam.

Comments are not places to state this kind of rubbish. This comment does not continue the conversation in any way, and the smarmy references to the blogger are really off-putting.

Making statements of why they think your website is doing badly, in the hope you'll notice and want to take action, is a tricky form of spam.

If the blog's owner wasn't completely aware of how their blog is performing, they may be taken in by this.

However, comments are not the place to offer such advice. It is also a form of self-promotion with a ropey call to action at the end, none of which is tolerated in commenting.

What do you think are bad comments?

Have a look through your collection of comments, and find the ones you think are really not up to the mark.

There are plenty of other criteria that classify as bad commenting, which I will write about in another post. So anything you can offer will be really helpful.

Let me know your ideas and thoughts in the comment box below...