How to build a good rapport when commenting online 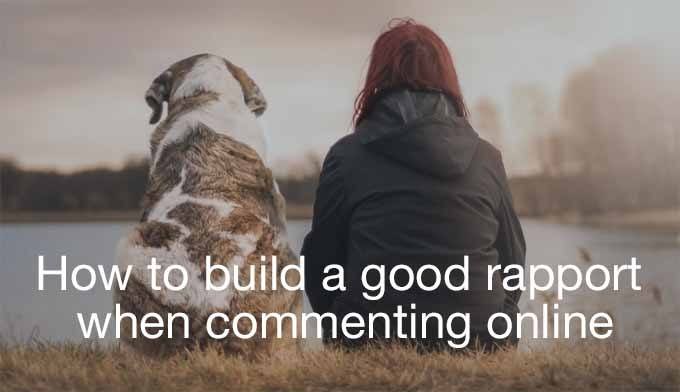 There are plenty of people socialising on the web who have no idea how to build a good rapport with those they are talking to.

Yes, the world has degraded into such a terrible place: manners, etiquette, politeness, common decency and kindness all seem to have been thrown out of the window. Those in marketing have adopted a hard hitting "throw it against the wall" attitude, or have transformed into spammers to satisfy their instant deadlines.

And yet the power of conversation, engaging purely to find out more about your customers, listening before leaping into the discussion, are all connected with how to build a good rapport with your friends, followers, fans, readers or whatever.

Take a look at this infographic below

What do you have in common?

It's always a good idea to have some sort of affinity with someone when you attempt to speak to them. This may not be possible in many cases, resulting in short, ineffectual exchanges which go nowhere. But it you want to build a good rapport with a particular person, you will need to make the effort.

Finding the common ground within a conversation helps with mutual understanding, the ability to relate to the subject, and an opportunity to see the other's point of view. It makes the process of talking to each other easier, placing you on the same wave-length without the need to explain absolutely everything.

There is the need to analyse the other person: what they're interested in, their intellectual level, the kind of words they prefer to use. This isn't to make you appear pompous, but to allow you to adapt, blend in, merge with their way of thinking, accustomise what you know to fit in.

Make sure your interest is genuine

People have an extra sense as to whether the other person is really interested in them or not. It may have something do to with the shifting eyes, lack of concentration and non-committal answers.

However, in the written form online, this is easier to disguise. You need to make a more concerted effort to show your interest in them or their subject. Confirm you understand, ask a pertinent question for clarification, or agree within an appreciative comment.

Show your interest through furthering the conversation, enhancing the subject, asking for opinions, offering suggestions, requesting their expertise within a point of view. This doesn't mean changing the subject, going off at a tangent, ignoring and contradicting what they've said.

Are you willing to show your vulnerabilities? People who lay bare who they are, show their human-side, expose their mistakes, share a story about their latest mishaps, are not only entertaining, but in many cases relatable. Especially if you can associate yourself with the other's exploits (even if you don't want to admit to them yourself).

This is all part of sharing common experiences. It helps reduce anxiety, lowers self-preservation guards, allows you to realise the other person is just like you. People like to be associated with like-minded souls, the sense of community, solidarity, comradeship can be attractive.

I have a friend who isn't afraid to admit when she went wrong, her lack of technical ability, the scrapes she gets herself into. As a result she has a large, loyal following of similar friends, all relating to her and what she stands for, and all willing tell each other about it.

Trust continues to be important

Part of the ability to build a good rapport is to make the other person feel comfortable when you talk to them. You avoid being confrontational, obtrusive, argumentative or non-committal. Instead you use the same vocabulary and sentence construction and produce a similar amount of content.

If you come across as relaxed, chances are the other will soon also be. Try to develop a sense of connection by exploring associated subjects and personal scenarios using a light, conversational tone. Making the other feel at ease will help loosen their tongue, which should result in some interesting discussions.

What you are trying to achieve is getting them to know, like and trust you. In other words, building a relationship with them. Finding out as much as you can about them, to allow you to know how you can help them later when the opportunity is right.

How can you make someone's day?

Someone who is joyful, entertaining, fun to be around with, and makes you smile (or even laugh), is always good to be around with. Humour is a good tool for helping to build a good rapport. Not only does it break the ice, it often has a relatable aspect associated with it.

You don't always have to be amusing to gain a foothold. Showing understanding, empathy, an affiliation to the subject or someone who is just willing to listen, can have a major impact. Being a friend when needed can be very powerful.

Another concept to consider is compliments. It's always nice to receive some sort of appreciation. Whether it's for something you've written, what you're wearing, or something you've produced and shared online. However, be aware that too much can be creepy, especially when delivered by a stranger who may have ulterior motives.

Remember something from your last conversation

I knew a midwife who had the ability to recall everything we had said the last time we met. This is a rare and valuable gift (especially in her line of work). Certainly my mother wrote down various important aide memoire about the people she was trying to impress when she was a freelancer.

Haven't you been gratified, even a little surprised, when an old friend brings up in a conversation something you mentioned last time? Doesn't it give the perception they really care about you enough to remember and mention it again?

Ask after someone's health, how is their new dog settling in. Did they enjoy the party they went to last weekend, or has their mum recovered from her fall. All these little things make a huge difference to the recipient, and certainly goes a long way to help build a good rapport.

What do you do to build a good rapport when you comment?

How often do you you think about who is reading your comments or social updates online? Do you take into account their feelings, considerations and present situation? How much do you know about them so you can write the most appropriate response?

The ability to build a good rapport with your followers, fans and friends, certainly through the power of good commenting, can pay dividends. You will always be recognised, appreciated and accepted. You are more likely to be placed on a revered spot, referred or recommended, and people take note of whatever you say.

So consider the impact of working on the unconscious minds of those who communicate with you. Aim to win them round and bring them into your line of thinking, but in a way they aren't aware of what they're doing. They will become stead-fast advocates, which can be very valuable to you indeed.

Let me know in the comments below your experiences of building a good rapport with your followers. Have you been successful, or have there been any disasters? What tips can you offer which would enhance this post? We would all love to hear from you.

How to grow a thick skin to cope with nasty comments

How to benefit from disagreeing politely

How to recognise good comments

How to use commenting for competitor research analysis