Combat toxicity by turning off comments? | The Commenting Club
0 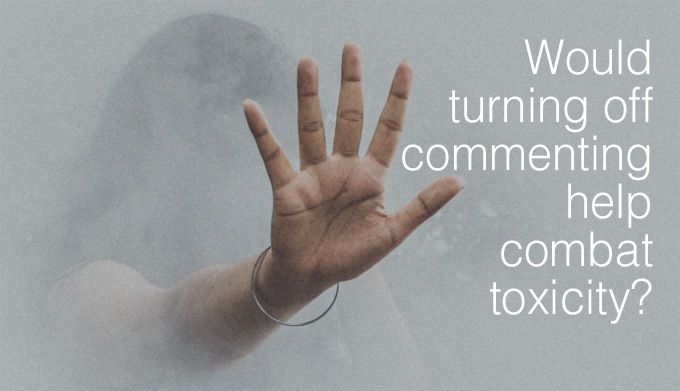 From 2014 the amount of spam took its toll on blogging. Another reason a bit later was toxic comments. And to such an extent people turned off their commenting facilities in order to combat toxicity.

But was this a good idea? It may have been the easiest way out at the time. Eliminating the problem by removing comments is a viable knee jerk reaction.

But this drastic response does has the potential to backfire. It's like cutting off your nose to spite your face. Now you cannot sniff or smell, but your eyes still see the spam and toxic comments happening around you.

Unfortunately there are many toxic commenters

The world is full of toxic people with toxic thoughts only too willing to spill their toxic vitriol on any commenting system they come across. Leaving your commenting facilities open is like waiving a red rag to a bull – they cannot resist a chance to vent their fury.

So way are they like this? Are their lives so terrible, they can only feel better by being horrible to someone? If you wish to combat toxicity, sometimes it's necessary to understand the root of their insecurity, the void they are so desperate to fill, or their position within the world.

Depending upon the amount of tolerance you are prepared to offer them, and your own sense of wellbeing and self-confidence, you have the decision whether to accept, counteract, ignore or delete anything toxic which arrives within your comment moderation queue.

But this doesn't necessarily mean turning off your commenting facilities.

How do we combat toxicity?

Similar to Greta Thunberg’s mission, the world needs to be convinced that, just like climate extinction, writing toxic comments is not going to help anyone (let alone those who write them). It is unfortunate these violations receive such a massive response, not only by their recipients, but also the media: social, broadcasting, papers and the rest.

Left unguarded and unchecked, the problem can easily escalate. Toxicity breeds hate. Hate turns into violence, both within the written word and elsewhere offline. However, there is only so much tolerance people can take before some sort of action is needed.

Just like those who have been brainwashed by ISIS, there needs to be some sort of mechanism in place to reverse this way of thinking. A PREVENT system specifically aimed to combat toxicity. A rise up of opposite behaviour, an overwhelming wave of positivity, a general focus on kindness, or a radical theory designed to show how better the world would be without toxic comments.

But this cannot happen if you turn off your commenting facilities.

Are you ready to combat toxicity?

This isn't going to happen overnight, but it needs to happen soon. Just like global warming, how to combat toxicity requires a concerted effort from everybody, not just a few who have been badly affected. Larger numbers of people portraying the same positive thoughts will have a much bigger impact than a lone voice desperately crying out into the dark.

The best thing to do about toxic comments is to ignore them. However, if you have to reply, do so in a positive manner. Make your responses totally neutral, and avoid getting drawn in by their clever tactics. Offer a different opinion based on accepted facts, and don't take anything personally. Generally they are not getting solely at you.

The idea is to swamp out toxicity with positivity and kindness. Although negativity tends to get more of a reaction from the press, people prefer to read positive content, especially if makes them feel better. The idea is to encourage more supportive, considerate and forthcoming comments in return, to drown out anything unwanted or horrible.

This is what commenting boxes are for. Closing them gives an indication the toxic people have won. Which is the last thing we want the world know…

Let me know what you think in the comment box below, we would love to hear from you.

Benefits of comments in eCommerce (UGC)
The benefits of the Thrive Comments plugin
The ultimate guide to attracting more Instagram comments
Why promotional comments can harm your business
How to recognise good comments
How to use commenting for competitor research analysis
Would turning off commenting help combat toxicity?
9 examples of useless comments
Example of a barrier to commenting on blogs
How to drive traffic to your blog using social chat