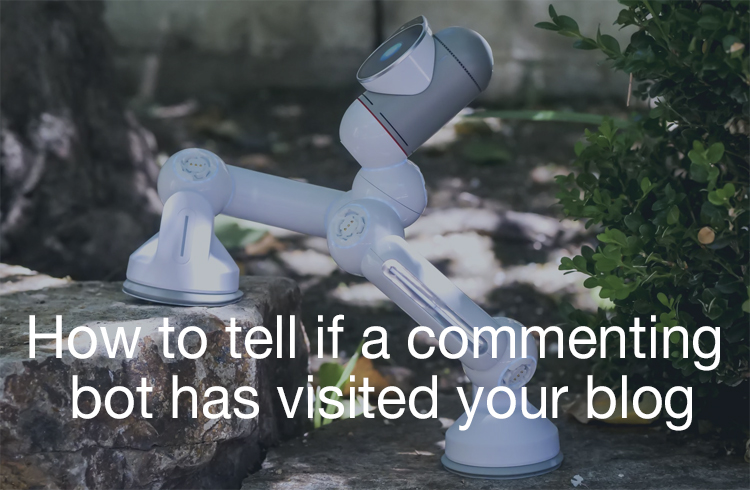 For years I always thought I was plagued by human spammers, but now I know different. I have been victimised by the dreaded commenting bot (or many) without realising it.

Unless, of course, the human spammers realised this was far too much work. Opting for the use of a commenting bot instead saves time and make the process more efficient.

We all know that commenting takes effort. But for many people, they see this as a drudge, rather than an opportunity for some meaningful conversations online with helpful people or prospective customers.

So how will you know if you've been visited by a commenting bot? Check out the infographic below:

For years I have been bamboozled by the one-liner or single word comment. I just thought the commenter was being lazy, or even too busy or distracted to leave a proper comment. How wrong I was!

If you are an algorithm, programmed to deliver a message as frequently as you can on many different blogs, you're not going to waste time pumping out a long, garbled message. (Well, some of them do, but then these are instantly obvious as spam.)

All this needed was human intervention to think of a suitable praising comment, enter it in, find the most appropriate blogs which could receive it, and then press Go. Job done.

Spam is notorious for delivering irrelevant comments, hell bent on getting their message across. Now we know why. Think how is the commenting bot's mathematical programme going to work out what the topic of conversation is, to offer something worthy within the reply?

Some would suggest commenting bots may include some sort of artificial intelligence. I seriously doubt it, as this is very expensive to procure, and is usually reserved for chatbots used in customer service. In this case there is no need for AI to deliver meaningful replies.

However, I did see evidence of AI within a commenting bot on Twitter. For International Women's Day, it commented on business tweets by revealing the gap in pay percentage between men and women within that particular company. Needless to say many tweets were withdrawn as a result.

Presentation is a give away

Because many of these commenting bots are programmed by people whose first language is not English, all the defects filter through. As a result the same mistakes in spelling and grammar are littered in the comment boxes of many unfortunately targeted blogs.

Before I had wondered why there were so many badly written comments. Now I know. It's no good me writing an e-course on how to comment better, if the 'beings' distributing the comments aren't even human!

I often wonder if these spammers who programme a comment bot to do their dirty work for them, realise how obvious their responses are. Even if they did manage to get past the spam moderators, the poor quality instantly lets them down.

It's all a facade

Another indication of a comment from a bot is the lack of a proper name or gravatar. Professional spammers may even have banks of servers which deliver up to 500 comments at a time from specially created fake accounts, or even worse, hijacked ones.

They are programmed to search out blogs which use specific keywords within their posts. This is why the comment doesn't properly match the topic of the post. The specific word searched for is enough to trigger the commenting bot to paste their message there.

Job done at lightening speed, they then move elsewhere. And finding the same comment repeated on other blogs is definitely an indicator of a comment bot at work.

A commenting bot is hardly going to care about how people react to their contribution. If you have been deceived enough to think you have received a real comment, answering it won't result in any engagement in return.

There are algorithms, like chatbots, which are designed to respond to human interaction. But there is no point in a commenting bot sticking around, or even returning to the scene of their crime, to check if the blog's owner has published and replied. They won't even know how to respond in the first place!

I think it's such a pity people are prepared to invest in commenting bots to spam blogs in the vain hope of getting a backlink. Commenting is all about communication, not spraying meaningless and useless contributions around the blogosphere with the hope some might get published.

Have you experienced a commenting bot?

I bet you the majority of the spam you get on your blog is via commenting bots. Why take the trouble to waste your time when it can be done mechanically and more efficiently? We are tormented by automation throughout the web.

Because commenting bots are also rife throughout social media. In fact far more so than on blogs. And since moderation is limited or even non-existent, they know they have a free rein to do their worst!

Have you ever been conned by a bot? How long did it take you to realise where all your spam comments were coming from? Have you come across any juicy examples you'd like to share? We would love to hear from you.