The cold hard truth about a commenting mindset 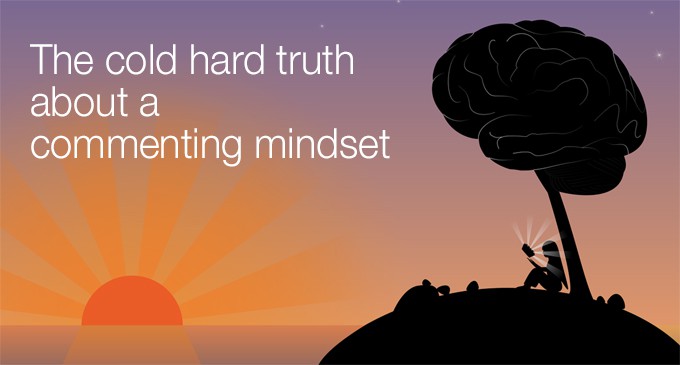 If you want to succeed with commenting, you need to have the right commenting mindset.

This is sometimes a hard concept for people to get their heads around. I get plenty of opposition from people who are full of excuses.

The usual excuses I alway hear

"I don't have the time." – We are all time poor! It's just a matter of prioritising your time if you really want to benefit from commenting.

"I can't find any decent blogs to comment on." – You just need to create a small list of really good blogs only once, and then gradually add to it whenever you come across another good example.

"Commenting is boring." – You probably really mean it's hard work. Yes, it does require a bit of brain power, but if you make the effort it is worth it.

"The commenting culture has changed." – This is a problem of a negative commenting mindset. Commenting has changed, but this can be adapted to bring it back to the fore and make it useful once more.

OK, let's look at it from another side. How many comments have you written recently on other blogs? Give to receive. Start commenting, and if you write as well as you say, this will encourage others to read your posts and leave a comment.

She is mentioning two concepts here: improving her quality of writing and a lack of response to them.

I agree this is a kick in the teeth for bloggers. However, is she writing for herself, or for her readers? Is her blogging is a therapeutic activity to make her feel better after a horrible day? Or is she writing about a subject her readers enjoy reading about and have an affinity with?

You need to change your commenting mindset if you want your posts to be read and commented on. It doesn't matter if you write like Virginia Wolfe or Jackie Collins, if your readers cannot relate to what you write about, they won't feel compelled to respond.

This is interesting. You may not blog comment due to lack of time. Yet I wonder how much time do you spend on social media? Would it benefit you to reference back to your blog posts? And how willing are you to continue the conversation there instead of on social media?

She now abandons the concept of quality to favour lack of time. Yes, we all suffer from not having enough hours in the day. Especially if you're a busy mum coping with twins.

However, it all goes back to the right commenting mindset. Nearly all of us have a smart phone that allows us to read blogs and social media updates.

It doesn't matter where you comment (see below!), as long as you do. Dexterity of thumbs is only one factor when it comes to writing a decent comment, the other is thinking of something meaningful and worthy to say.

We are all time poor. I hardly ever tweet nowadays. However, it's good to have conversations like this to bring the concept of commenting back to the fore. It also depends upon priority: if you want more comments, comment yourself, rather than complaining you haven't got any.

She succumbed to the commenting mindset without realising it!

I always try and put a positive slant within my comments. There's too much negativity flying about nowadays. We all need a boost, especially when coming to terms with a new concept like an improved commenting mindset.

Sometimes all that is needed is a chance to have your say. That is what commenting really is! Rather than sitting there nodding (or frowning) silently to yourself, get out there and let the author know what you are feeling.

However, it's worth pausing at least a second to think first before responding. The time scale between these tweets lengthened as she started to contemplate her replies. She may have been doing something else in between, but that gave her time to gather her thoughts before continuing:

That's a really good start! Replying back is a great way to continue the conversation, both on blogs and social media. It is so much better than a like, or an emoji or meme, a single word or a generic meaningless sentence. Having a conversation like this could make someone's day!

You don't have to comment on blogs to have a conversation. The conversation could happen equally on social media or within a post (like this one!).

But, in spite of the time-delay in moderation, it can be really gratifying to the blog's author if someone took the time and effort to write a comment. And the best way to do this is to go out and start commenting yourself!

Put yourself in the other blogger's shoes. Imagine how they would feel to get a comment. Change your commenting mindset by getting out there and leaving comments left right and centre. Because eventually the favour will be returned on your own blog.

And if this practice was expanded upon, we'd easily revive blog commenting again.

Let me know what you think

You know where the comment box is! Go on – break the mould (and your commenting mindset) and tell me what you think, feel or whatever. We would all love to hear from you.