Remember feelings are not facts when expressing yourself 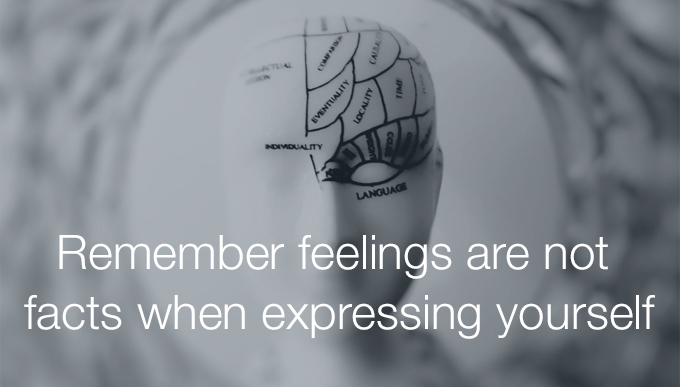 There is a lot of false information flying about the web, mostly arising because people fail to realise feelings are not facts.

Feelings and emotions play a very large part in commenting. These usually arise from instantaneous reactions to what you've just read, watched or listened to.

We experience these consciously (feelings) and subconsciously (emotions) with little effort, whereas facts require more hard work to bring to the fore and be used appropriately.

The infographic below shows you how to understand that feelings are not facts:

How feelings are not facts

You may think it's obvious feelings and facts are not the same. Especially since feelings and emotions are the result of chemical or hormonal reactions in your body. And facts are something externally produced in an attempt to impress or confuse others.

Feelings and emotions have evolved since our caveman days. They were used as survival tactics to alert us to everyday dangers, or make us aware of opportunities to fulfil our basic needs. Feelings are meaningful social interactions as a result of emotional connections. Whereas emotions are a primal reaction to specific stimuli.

Facts are artificially generated pieces of information based on evidence or research. One definition I found said they were known or proved to be true, but in today's world you cannot guarantee this. Facts can be distorted for malicious intent, or misconstrued according to belief, strong feelings or emotional reactions.

Some commenters get confused about feelings and facts, and muddle these up within their responses. This is particularly true since commenting is a spontaneous reaction to whatever has compelled them to have their say.

You could say commenting is a reaction like a feeling. It induces emotions which flood out, and highly influence the content, regardless of whether the result is relevant, associated or completely going off at a tangent.

Facts are designed to bring some stability to the situation. They are neither conscious or subconscious, but purposely brought forward to solve a problem or answer a question. Facts do not bend to hearsay, conjecture or gossip. They have to be sought in order to provide the explanation which is obviously needed.

How changes affects them

Since feelings and emotions happen because most commenters are human, they do have the ability to distort or influence how the subject or topic is understood. After all, feelings are acquired through previous experiences, which makes them unpredictable or easily mixed up from the truth.

Also the post's author cannot guarantee the commenter will have properly read through all the content, to take account of the facts placed before them. This is vital to form a considered opinion from the information which is freely available, but unfortunately this opportunity is often ignored or lost.

Feelings and emotions can change facts to suit the mood of the commenter. Any other facts they have heard or prefer can alter the perception of the existing information. These can be subject to a wild imagination or a desire to see the world in a particular way. As a result this may modify what is said within their comment.

The amount of effort required

Forming an opinion based on a feeling requires little brainpower for this to happen. The response is already formulated inside the head with not much thought or consideration. Often the result in instantaneous, as if the mind made the decision even before everything had been read or absorbed.

Facts, on the other hand, require more time to be found, gathered in, understood, sorted into relevant areas and rearranged as an original thought. There is always the spectre of plagiarism lurking in the shadows, or the uncomfortable feeling that someone else has already got there first and said what you were going to say.

Facts need to be analysed and deemed suitable after they have been dredged from the bottom of knowledge banks. People who write posts or comments without the necessary facts at their fingertips run the risk of looking stupid, misinformed or even out to cause trouble. Many a troll has based their tirades around facts which aren't true, inappropriate or perverted to suit their own ends.

Why adaption may be necessary

Writing your comment based on a feeling or an emotion requires very little processing effort before it is produced. These concepts spring to the fore, often without any reasoning or explanation. An inexperienced commenter may easily fall prey to this, and be unable to recognise feelings are not facts before starting to write.

Experienced commenters have the ability to stop and think before contributing. Not only will they formulate their response based on facts, they will have changed these to fit with the topic or be relatable to their audience. It's all very well relaying facts to back up an opinion, but if these need to be adapted to be appreciated or understood.

Facts are excellent criteria for writing good comments, but they need to be presented with the readers in mind. You could have the most brilliant facts to prove your point. But if nobody else has the ability to see their relevance or suitability, you will have not fulfilled your goal.

Confusion that feelings are not facts

Take extra care when you start to write a comment. Make sure you have read the post properly from beginning to end. Then take time to think about what you've just learned, and how you will respond to it. Analyse all the facts in front of you, to prevent yourself from succumbing to feelings or emotions which may influence your response.

Feelings and emotions are important in commenting. They stop your contribution from becoming dry or boring. Many conversations are based around these phenomena, so heeding them will do your commenting the power of good. However, it's best to avoid these from overpowering or dominating your response, to its detriment or to destroy your reputation.

How have feelings, emotions and facts affected the way you comment? Are you a stickler for facts, or do you let your preconceptions get the better of you? Let us know in the comments if you have any tips or tricks to help with this, we would love to hear from you.