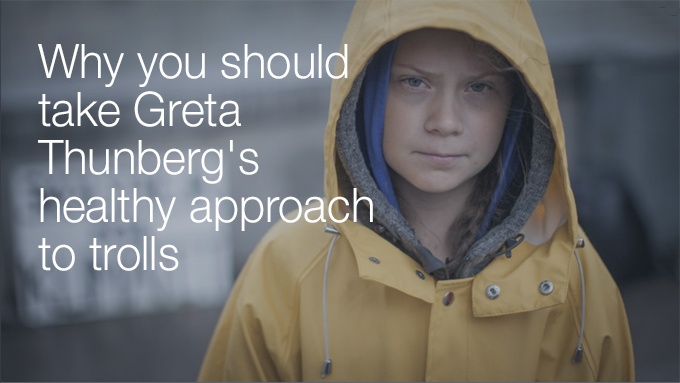 Greta Thunberg is an amazing person on so many levels. As well as her determined persistence in getting her message across, it is her healthy approach to trolls which also fascinates me.

I suppose it has something to do with her Asperger's and the other so called 'afflictions' she has been labeled with. But in my mind these have held her in good stead.

It is her ability to continuously focus forward, to not get sidetracked by unnecessary noise, mainly from people of power who feel uncomfortable by what she is saying and campaigning for.

At 16 years old Greta Thunberg rose to fame due to her single-handed campaign against climate extinction. Others very quickly followed her cause and the campaign spread world-wide.

However, this young girl pertinaciously continued to spread the word. As if it were her calling, her raison d'être, a personal contribution towards saving the world.

Her message may have resonated with many ordinary people, but politicians, presidents and other powerful personages were not so enamoured with the message she was sharing.

Abuse to save face

Unfortunately the easiest way to counteract something you don't agree with is to be horrible to the person who delivered it. And that is what many eminent bodies did.

And the majority of these were powerful men. Socially short-sighted, white middle-aged, successful males who didn't like their comfortable lives turned upside down by a mere girl throwing a spanner in the works.

Any ordinary mortal would have quailed and shrivelled up at such abuse, but not Greta. She subconsciously put in place her own troll control which resulted in her healthy approach to trolls.

These individuals who retaliated with such venom towards this simple Swedish girl were doing their best to undermine her. They considered what they said, in their elevated offices of power, would have enough weight to crush her.

In an ideal world, yes. But Greta was campaigning to change the world. The more horrible comments they threw at her, the more stupid they appeared to be. No matter how degrading and detrimental their words, these all appeared to slide off Greta's back.

It seems that the more troll-like the reactions were, the less impact they had. Important people began to be criticised in their own right for their stupidity, their short-sightedness, their inability to understand Greta's message and do something about it.

How did Greta react?

Greta's autism made her oblivious to the snipe remarks and insulting comments. She didn't get the meaning behind the mockery and adapted responses to suit her and her cause.

Donald Trump's tongue-in-check tweet was gathered up and the positive element inserted in Greta's Twitter bio. There was no way she was going to let someone like him get the better of her. She knew she was way above him on many levels.

To survive trolls from any quarter, you have to ride above them. Know you are better than them. This healthy approach to trolls is an excellent way to counteract the nastiness, the unnecessarily despicable behaviour from your opposition.

Many celebrities take everything the public say about them to heart. This is fine from the adoring fans, but when trolls start to come out from under their bridges, this usually results in an adverse reaction which can be very detrimental.

Greta doesn't appear to be worried about what either her fans or trolls say. Whatever she thinks she keeps to herself, unless she can use it to further her cause. It is this dogged determination which is part of her coping mechanism.

It also many be to a lack of understanding on her part. This is totally excusable for someone with Asperger's. In fact this may be a benefit. Anyone afflicted by a troll should adopt the same stance if possible to save their sanity and reputation.

Adopt a healthy approach to trolls

Greta is an inspiration to anyone who is tormented by trolls. She keeps her reactions private. Positive elements are used to her advantage. She rides the wave to attain more publicity for the goodness of her cause over the inefficiency of those who fail to understand her.

It takes great courage to undermine a troll who is trying to undermine you. It also takes a great belief in your purpose, total focus on your objectives and an unblinkered attitude in attaining your goal.

Therefore I suggest anyone venturing into the public world should take heed of Greta's healthy approach to trolls. Certainly necessary to prevent the buggers from grinding you down!

The ultimate guide to attracting more Instagram comments
Why promotional comments can harm your business
How to recognise good comments
How to use commenting for competitor research analysis
Would turning off commenting help combat toxicity?
9 examples of useless comments
Example of a barrier to commenting on blogs
How to drive traffic to your blog using social chat
The importance of thinking before submitting your comment
How to gain authority and influence through commenting