The importance of a name when engaging online 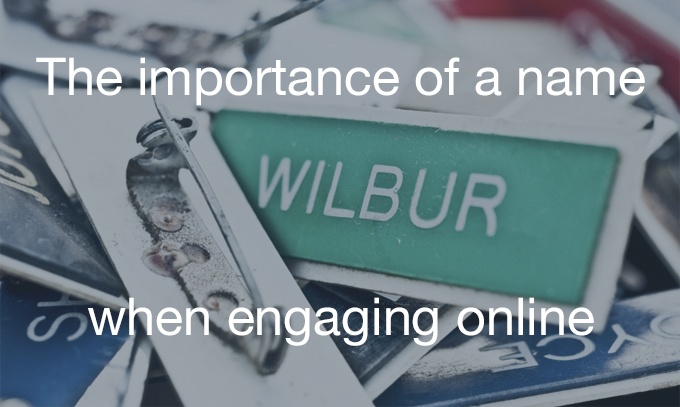 How do you react whenever you see (or hear) your name? I bet you immediately take notice. I mean, who wouldn't, eh?

Thus the importance of a name becomes apparent whenever it is used. Which many savvy marketers and techie programmers have realised by adding in merging facilities and dynamic text, which picks up on this vital piece of data so willingly given.

Even though the importance of a name is recognised, it is often ignored, especially when its impact is so vast. Especially within interactive circles. I know self-assured business men and con artists use your name all the time, by generally others don't.

Take a look at the benefit of the importance of a name in this infographic below:

What's so wonderful about your name?

When I was a small child, my most favourite book was Alice in Wonderland. I didn't understand the story much, but somehow I could relate to the heroine because she had the same name as me.

Whenever you're passing a gift shop and spot the display of key-ring tags with names, I bet you look to see if they include your name. Many times I have been bitterly disappointed to find Alison is the only option.

Never underestimate the importance of a name. In particularly your name, but also other people's. They are just as enamoured with their name as you are with yours. Remember the world doesn't only revolve around you (though plenty of people think it does!).

An immediate form of identity

Showing your name is extremely important. It acts as a latch, a device to grab hold of, for people who wish to make contact. A lot of communication happens via hand-held devices in scenarios where data like names aren't instantly available, so tend to be omitted in the salutation area.

But this doesn't mean your website should be devoid of your name (let alone your picture). Many a time I have searched high and low for an individual to match to a name, only to get a blank response. Are you really such a hideous ogre which shouldn't be revealed in case you frighten the horses?

I make a big effort on my About page on my websites: 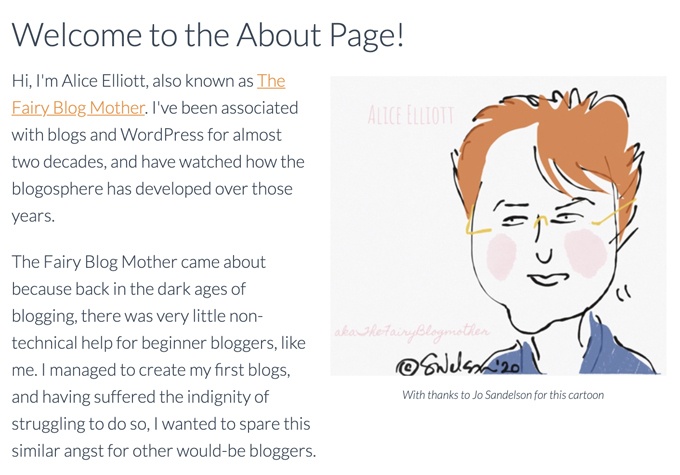 And in my bios at the bottom of my posts:

And I also have a gravatar which shows up within my comments. If you see a different image of me now, well, I regularly change it. Nothing stands still, and you definitely shouldn't be showing a picture of you 20 years ago because you looked better then. People want and value up to date information.

But the most vital element is my name, which doesn't change. When I got married I resisted using my husband's surname for almost two years, only to relent when the midwives kept asking for Mrs Elliott. Perhaps then it was time to change...

What is the importance of a name?

Whenever you see or hear your name, a portion of your brain lights up. It's no good asking me which bit, as I'm not a scientist, just a lowly blogger. But I'm sure this stimulates the release of certain vital chemicals which result in a good feeling, awareness of others and increased empathy. Not to mention a sense of ownership, authority and self-importance.

What is your response? Positive! You are gaining likability, resulting from common courtesy and simple recognition. Someone who obviously cares has given you priority above others. You must have put forth a good enough impression to arrive at this connection.

Now stop and think how other people would relate to these same sensations. This is important if your objectives are to gain awareness, increase your reputation and build relationships. Start using the other person's name (not too frequently as that would be creepy) within your communications to get better results or to highlight your point.

Where should names go?

The first is an example of what I usually get: abrupt, faceless, short. This one does say something nice, so warrants publication, but I have no acknowledgement of me as the author of the post he is commenting on. Luckily I am able to at least glean his name for my reply: 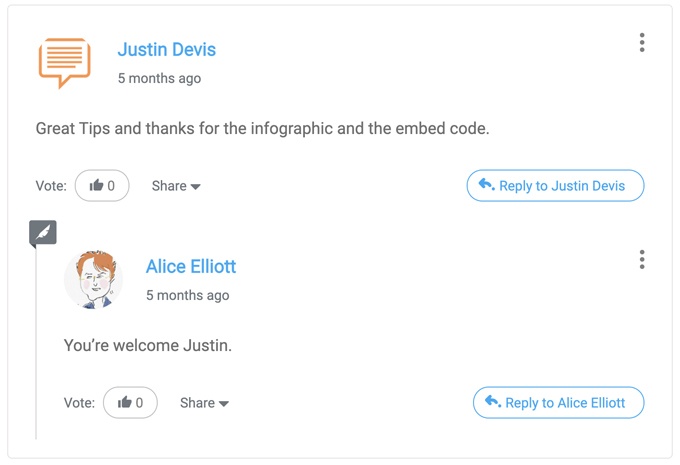 And here's an example which uses names: 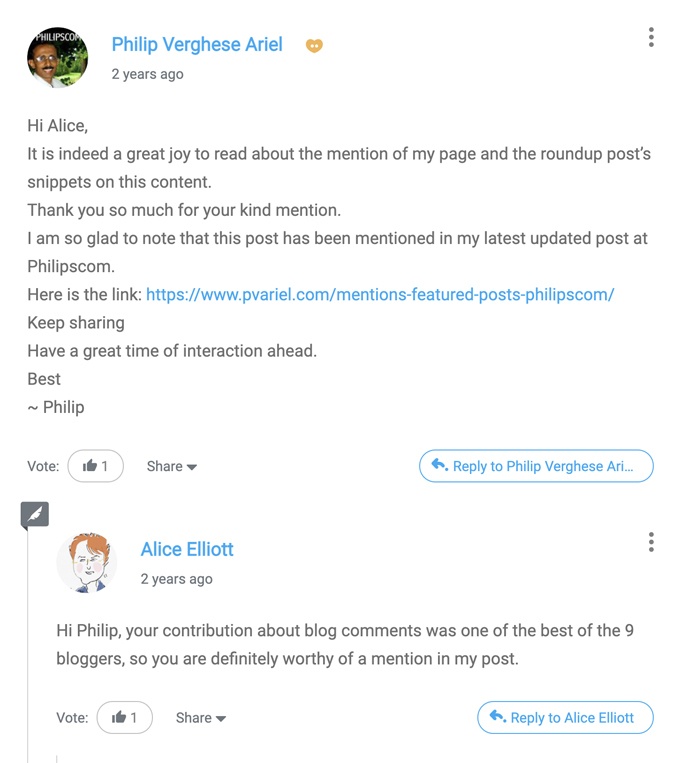 As a result Philip and I became great friends through commenting. Not only did he use my name to greet me, but he used his own to sign off too. Philip spent time learning to be a comment author before becoming a blogger, so probably learned early on the importance of a name when commenting.

Which comment would you prefer to receive? Let me know in the comments below...

This is such a simple thing do to. Acknowledgement of the person you are communicating with doesn't have to be placed at the beginning: 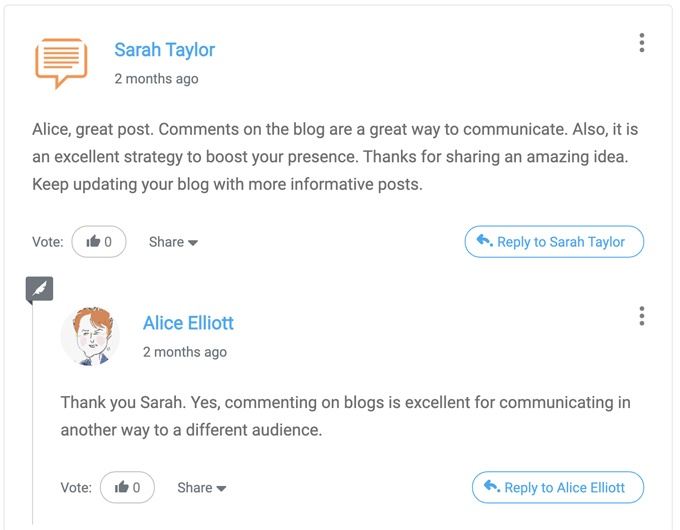 It could easily be mentioned at the end: 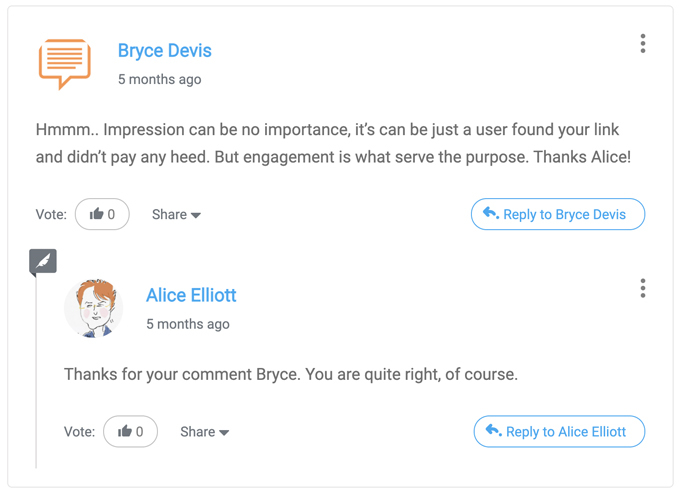 But saying Hello, Hey or Hiya without a name just doesn't cut it: 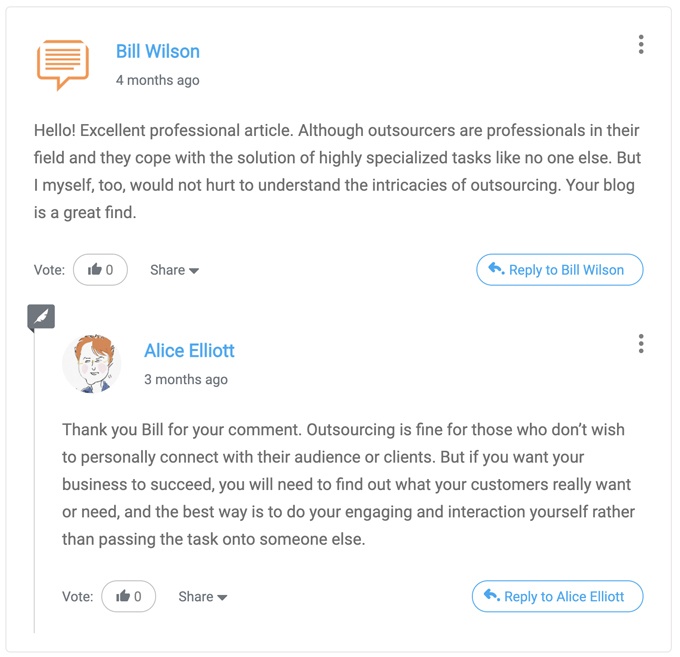 This is because it's deeply impersonal, and shows the commenter couldn't be bothered to find out my name (clearly visible in my bio just above the commenting box). Unfortunately this practice isn't only confined to comments, but texts, emails...

Which names are suitable?

There is this tendency to not want to reveal who you are on the web. True, it can be a horrible place, with all sorts of nasty people flying about (also not using their real names). Many bloggers create pseudonyms to protect their identity, especially if they are writing about their family or a personal or risqué subject.

I hid behind my blog's name for years:

You could easily find out these blogger's real names once you make friends with them, usually though extensive commenting. This needn't be on their blog, but also on social media as well. In fact in any place where social networking can happen, even off-line, as conversation should be similar to commenting:

But if you wish to comment using the name most people know you by, and you know will recognise and therefore value what you say, this may be a good idea (as long as it doesn't backfire on you). Sometimes it could be a good idea to come out from the undergrowth to reveal your true self. If you're still worried, why not have two commenting IDs for different purposes...

However, the impact of anonymity can be more serious. Trolls, for example, are able to relinquish all responsibility for their actions because they are purposefully anonymous. They now feel safe enough to unleash their incivility and ugliness, spreading their destroying impact to upset people or even pervert political events.

Spammers also relish in anonymity so they can do their worst with impunity. They care nothing about the blog nor whoever reads it, they just want their comment published to activate the links within it. In a sense commenters who post purely for backlinks to their websites could also be seen as spamming.

And those who comment using their business names aren't being as clever as they think. This is not a way to stimulate the search engines. Below is a comment delivered by someone who is obviously commenting to get his website's URL out there (pity it's a no-follow link!), and as a result comes across as impersonal as ever: 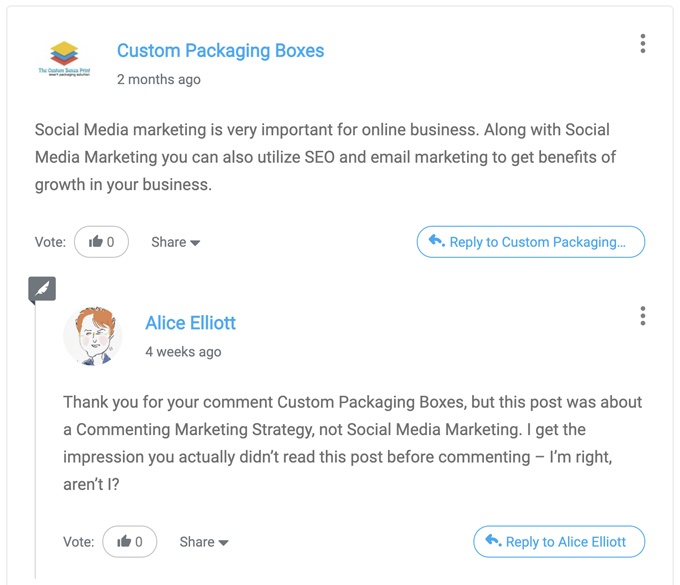 I didn't have to publish and answer it, but I wanted to use this as an example at some point (job done!).

How much do you value the importance of a name?

In this case I'm not talking about you, but about the people you are attempting to make a connection with. How many scenarios can you think of when using their name would have a positive impact?

The pure action of using the author's name as a greeting and signing off with your own immediately sets your comment apart from the others. It shows you care about the post, their blog, even the subject. You have made an effort to engage rather than just rushing off an answer for the sake of it.

Commenting is about engaging with other people. It's isn't a chore or something which 'ought to be done occasionally'. This is an opportunity for making a new acquaintance, leading perhaps onto better things if you manage to hit it off. And this depends on how forthcoming you are from the beginning.

So next time you want to comment, remember the importance of a name. Spending just a few extra seconds looking for it could make all the difference in the world (and certainly for them!).

The benefits of the Thrive Comments plugin

Why your readers should create a sense of community

Why you need a gravatar for commenting

5 reasons why you should start commenting on blogs again

8 benefits of commenting on blogs