How to benefit from disagreeing politely

The benefits of the Thrive Comments plugin

How to recognise good comments

"Social media marketing strategy is a powerful way for businesses of all sizes to reach prospects and customers. Your customers are already interacting with brands through social media, and if you’re not speaking directly to your audience through social platforms like Facebook, Twitter, Instagram, and Pinterest, you’re missing out! Great marketing on social media can bring remarkable success to your business, creating devoted brand advocates and even driving leads and sales."

check out my challenges 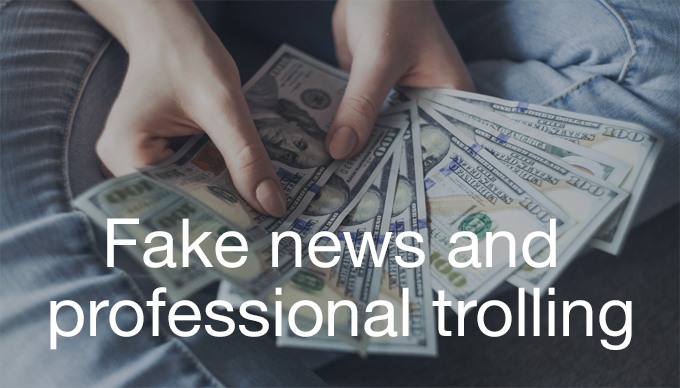 "You haven't mentioned anything about professional trolling!" said one of my Troll Course participants.

Ooops, better do something about that. Need to keep the punters happy. Can't leave knowledge gaps everywhere.

This was a brand new subject for me. So after a bout of research, I came up with this infographic:

It doesn't surprise me people make money, good money in some instances, from trolling. The online world has become so corrupt, what with spamming, trolling and much more destroying everybody's lives.

Apparently if you have no morales or a sense of guilt, you can get paid to dominate public discussions. The idea is to distort facts on behalf of a client who wants to win, divert a situation to suit his own ends, or just out to cause as much chaos as possible.

The web is an open book to millions of gullible people. Those who are almost ready and waiting to be manipulated, cajoled, hoodwinked or perverted. Mostly without them realising it. In some cases this is done so subtly, people aren't aware professional trolling is happening to them.

Certain countries (which I won't name here) apparently employ hundreds, maybe even thousands, of professional trolls. Their purpose to fill in comment forms and forum spaces to spread propaganda. Apparently some high-profile personalities help similar distinguished dignitaries to succeed in their endeavours through professional trolling.

These people operate in group-like situations, many sitting on front of their computers side by side. They often have multiple accounts at their disposal, layering up crooked discourse which makes up most of social media.

This means you cannot believe anything you read on the web. Hoards of professional trolls are trawling out social messages at an alarming rate. These are designed purely to distort the equilibrium and spread fake news and confusion to unsuspecting victims.

Professional trolls prefer to attack particular targets. Such as presidential candidates, CEOs of large companies, organisers of groups on particular subjects. An example could be plus-sized beauty bloggers, or celebrities who are vulnerable or present a particular cause.

Professional trolls focus on personalities or social groups which are in the news, trending or have a purpose which they particularly want to attack. Social media is already overrun by hatemongers, cyberbullies, misogynists, body-shamers, racist neo-Nazis and anarchists, so professional trolling is only adding to the mix.

They dominate social networking sites with fake accounts, spoofed emails and messages designed to cause chaos. They sniff out stories or organisations which they are paid to disrupt, contradict and mutilate to whatever is required by their bosses.

Professional trolls are employed to push political agendas by drowning out rational discussion by sheer volume. This volume could be loud, fight-picking talk (usually reserved for individual trolls). Or huge masses of comments piled high in a short space of time (typical of professional trolling).

Ordinary trolls usually only have one account, hiding behind a pseudonym with a dodgy email address and usually no gravatar. If they want to take this hobby a step further, they may operate from a few more accounts. This can be useful if a social network blocks them or gives them a hard time.

Professional trolling operates with multiple personas from a huge number of accounts. These automated systems are loaded up daily with pre-written answers. These are churned out regardless of location or relevance. However, these are humans and not troll-bots, so there is a minimum amount of guidance where their comments land.

Professional trolling is based around social media mind-conditioning. A lot of people are unsuspecting enough to believe almost everything they read on the web. Especially if it is cleverly written and displayed in a convincing way.

It is becoming more difficult to sift fact from fabrication in whatever you read on social media. I know loads of people who are easily taken in by the latest bit of gossip. They readily share it with their friends without a moment's thought.

This is exactly what the bosses of the professional trolls want. Their purpose is to twist the truth, make their lies believable and spread their dissension in as many different directions as they can so more people get to read it.

It seems weird that people get paid well just for copying and pasting comments on the Internet. I imagine it is a really boring job, as these trolls usually don't get to answer what they publish.

These comments are designed to sensationalise, pervert, change mindsets and distort belief. They are not produced to be answered. Even if they were, these trolls probably wouldn't have the know-how or expertise to respond properly anyway.

The idea is to bombard the web with these messages as much as possible. Professional trolling works on sheer volume: spamming commenting boxes and forum quotas to death with the same information in hope that most of it will stick.

You'd think this wouldn't succeed, but this tactic has become so heightened and prolific, it is saturating the social networking waves to such an extent. It is ruining the concept of ordinary social conversations in favour of dissent, fake news and perversion.

And it is persistence which prospers. Constant assaults on social networks, and tireless comments overwhelming reason and truth. Continuous distorted facts adjusting how people think and act, causing misery wherever they go.

These most far-fetched, outlandish and scandalous comments obviously work. Those who believe and share them are literally feeding the trolls, unaware of the malicious devastation they are helping to spread.

Professional trolling spreads its information like gossip. It works on the DRUMS principle: disinformation, rumours, untruths, myths and smears. People love reading this kind of thing, and if it is repeated enough, eventually it will pass off as the truth.

It's relatively easy to sow confusion, especially to the uninitiated. Too much conversation has been diverted to manipulate and control certain scenarios. This could be extremely lucrative to particular people hell-bent on achieving success through undermining means.

What's your experience with professional trolling?