What are rude comments and how to deal with them 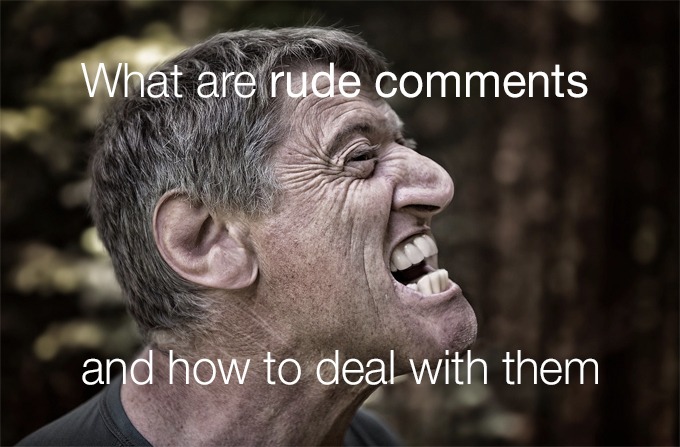 My definition of rude comments is those responses that doesn't fit into normal society.

They can be irrelevant, inappropriate, detrimental or just downright annoying. They are not written with a kindly disposition, but usually in contempt, with an aim to cause havoc or upset.

The sort of people who write rude comments are usually bored individuals, or those who just want to cause trouble. Or they are jealous of someone else's success and wish to destroy this in some way.

You could also call these people trolls, and therefore the kind of comments they write as spam.

Those who leave a comment on an update that bears no relation to its subject is very annoying. It is extremely rude to talk about something else other than the suggested topic. This clash of manners could easily be avoided through common courtesy.

There are people who have a pathetic need to have their say, regardless of what others think. Others churn out their thoughts with little consideration on the repercussions this may cause. This shows selfishness, unawareness and belligerency.

Some comments are written solely to upset, anger or blatantly oppose to spark a fight. These are unnecessary and inappropriate, and the detrimental nastiness could affect both the author and other readers.

More about the people who write them

Usually people who write rude comments find it hard to integrate into society. If they hide behind an anonymous persona they are usually a troll. But they could also be social misfits who find it difficult to communicate properly or relate to people.

These individuals are either awkward in networking situations and say the wrong thing. Or they are so puffed up with self-importance, whatever they write supersedes anything else regardless of what the subject is. Or they could be blinkered to what happens around them, so they fail to notice what they're doing is wrong.

Some delight in being horrible, usually due to boredom or jealousy. They get irritated by other people's opinions or successes, and enjoy provoking anger or upset. They like to exasperate and destroy any situation, and target certain subjects, personalities and minority demographics.

How to deal with rude comments

First, you need to focus on the positive, and what aspects of your post or update you know are good or worthy. Trust in yourself and in what you know, and in all the hard work that has gone into producing your content. Never let an idiot undermine you who knows nothing about your subject.

Back up your argument with facts and figures. Find anecdotes or scenarios others can relate to. Get your audience on your side so they can support you if necessary. Your readers can help police those who write rude comments by confirming your side of the story.

Try and put yourselves into the shoes of the rude commenter. Analyse why they wrote this stuff. If you understand them, it will help prevent your anger and upset, and possibly create pity. You have the power to either ignore them, delete their contribution if possible, or answer appropriately (see below).

How to deal with these 'trolls'

If you get rude comments on your blog, you have the power to moderate them. You could just delete them, mark them as spam or block their IP addresses in the settings like other annoying spammers.

However, there is no moderation on social media. It is the rude commenter that has all the power. You could either accept there are many stupid people in the world who like writing this sort of stuff, and ignore them. Or take careful steps to counteract them.

If you do decide to respond, avoid rising to their bait. If you are upset or angry, write your response elsewhere (eg in a Word document). This can be cathartic and make you feel better. Then take a break and extensively edit it before submission (if you still think this is necessary).

Can rude comments be managed?

It is important to take a step back to analyse why these rude comments have been written. These may not be horrible people, but instead unfortunate. They could be bad writers, have a poor choice of words, not be very bright or have not read the original post or update status properly.

Many things could be wrong with you. You could be stressed, over-sensitive or have misinterpreted the real meaning. The comment could have triggered an emotion, been too demanding or interrupted your train of thought at a particular time.

Avoid passing on your irritation or stress onto others. Tame your emotions by venting your anger elsewhere, maybe within another fantastic post. Set an example of good commenting on other blogs and social updates to put the world to rights and to level out the playing field.

Can we collectively control rude commenters?

The best thing is to keep your cool. Try to maintain the upper hand and avoid getting drawn in. Attempt to counteract their vitriol by showing them up for what they really are (if they're trolls). Or counteract their argument with facts and anecdotes which they cannot deny or destroy.

Get help from your friends. There is power in numbers, and together you can saturate the comments in your favour. Form a collective stance against trolls, who won't be able to cope with a massive adverse audience. Or with benign rude comments, gather together enough evidence from others to prove your point.

You could use tactics such as hashtags to draw attention to trolls or rude commenters, to shame them into submission. But this may have little effect if they are unable to recognise their inadequacies, or even exasperate them into becoming even worse than before!

Let me know your thoughts

As always, we would value your opinions on this matter; the comment box is just below. We look forward to reading them.