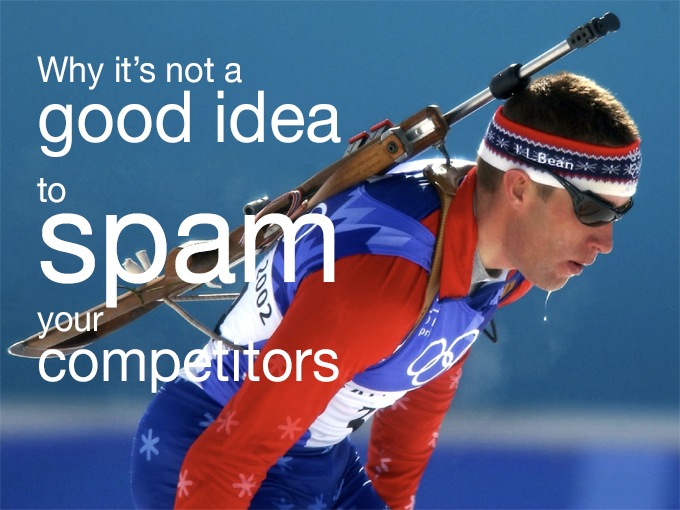 The idea for this post was alerted to me after I had written this post about spamming tactics you need to avoid when commenting.

At first I didn't understand what was meant by 'to spam your competitors'. I had all sorts of visions about people writing horrible troll-like comments to undermine your posts.

And of course it could be like that – but it invariably isn't.

It's all down to perceptions and reactions.

Who is a real spammer?

You'll know a real spammer when you come across them. Their comment could be one of these:

Usually most spam has been eaten up by a spam blocker such as Akismet (provided you've activated it), so you won't see the really horrible stuff that's doing the rounds.

Generally if you read the comment and you feel it has said very little, it doesn't match your post's subject or they're burbling on about themselves, then you could consider it as spam.

Who is a real competitor?

In spite of what you think, there really isn't such a thing as a competitor within the blogosphere.

You may consider they are doing the same business as you, or writing the same kind of posts – but stop and think about it: are they really exactly the same?

Do they have the same readership as you? Is their writing style the same as yours? Do they cover the same subjects? Have they the same opinions as you?

It's time to realise these so-called 'competitors' aren't what you think they are. They are just ordinary bloggers writing about what they know. And this isn't the same as you.

Other readers will appeal to their differences. Their points of view will resonate with another audience. Their knowledge will satisfy an alternative crowd.

How do you spam your competitors?

Some bloggers can get paranoid about a reader who is 'similar' to them commenting on their blog. They may feel threatened or imagine they are trying to poach their followers.

But in reality, what is happening is that these innocent people are expressing their appreciation to a like-minded writer. They may even be trying to create a mutual relationship as a family of bloggers within the same subject.

There is nothing wrong with this. In fact it is a good thing. We should all work together, help each other, swap ideas, ask for recommendations and learn from each other's expertise.

But what really happens? In a fit a pique, you reach for the spam button and you spam your competitors. Just like that. No thought, no consideration, just a spontaneous reaction to 'get rid'.

What happens to spam?

There are two methods of getting rid of comments: marking it as spam or placing in the bin (trash). The first marks the comment as a nuisance, the second merely puts it somewhere else.

Once a comment is consigned to the spam folder, the destiny for its author is bleak. This is because Akismet is configured to recognise what has been classed as spam, and prevent it from appearing again on other blogs.

The worst damage occurs when you delete the comments in the spam folder. This final act consigns the author's details, plus the IP address and URL, into a database within Akismet.

Once in there, if these details appear again, Akismet will immediately class that comment as spam, and the commenter will be told it cannot publish the comment on that blog. This extends to all blogs, even if the contribution is a valid comment.

How do you reverse this?

This happened to me, and it was very distressing. Someone had committed the act of spamming my comment. They probably saw me as a threat, even though I wasn't.

In the end I had to go to the Akismet website. I asked if they would consider removing my details from their database. They had to check all my comments I had previously written on other blogs, and make a decision whether I was a real spammer or not.

Luckily for me they reversed the ban. I was able to comment again on blogs that used Akismet as their spam blocker. (Since this is a huge proportion of blogs, this meant virtually all relevant blogs that I regularly read.)

This is the extra schmozzle you have to go through to clear your name as a commenter. All because of someone who didn't know the consequences of when you spam your competitors.

What's the moral of this story?

If you are threatened by a comment, think very carefully before you reach for the spam button.

Real, bona fide spam should be spammed. Comments you don't like should be binned. Think of the spam button as launching a nuclear bomb – the repercussions could be disastrous for others as well as your worst enemies.

Are you really that heartless to consider it necessary to spam your competitors?