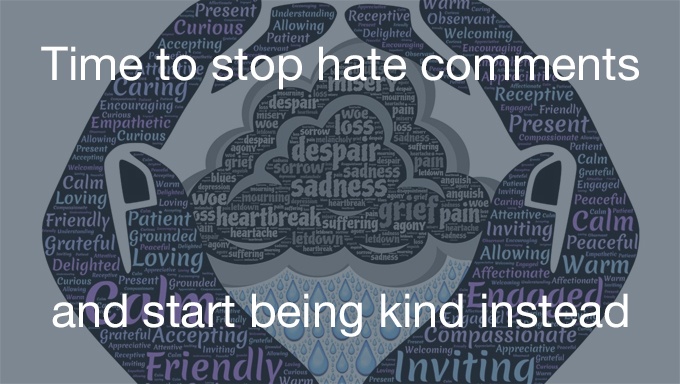 The media world is reeling after the announcement of the death of Caroline Flack.

Another celebrity has taken her life. OK, there are many factors at play here: her mental health wasn't stable, she was in a social world which is rife with trolls, she had risen to fame through many popular TV shows, and she was unfortunately waiting for a court trial.

But, in spite of everything, should the onslaught of troll vitriol be the norm for celebrities? Should they put up with hate comments just because they are famous?

For the past few months I have noticed more announcements on social media that people are fed up of hate comments. This detrimental style of engagement is not appreciated any more. Both by those who are at the receiving end, and by those who come across them.

There is a trend going away from negativity towards positivity. Away from horribleness towards being kind to each other.

Even Caroline herself tweeted about this before she died: 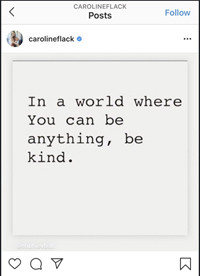 And this image was highlighted multiple times during the Twitter storm that occurred in the 24 hours after her death was announced, including the hashtag #BeKind.

Why so much negativity?

The world appears to be saturated with negativity. You see it everywhere: online and offline media, advertising, social interaction, politicians throwing unkind comments at each other across the parliament floor. (Celebrities are now starting to open up saying they can't cope with negativity on Twitter.)

And who is it that has fuelled this? Is it the media, press and other influencers? Has it become an acceptable way of life? Does it really have the desired effect it is working towards?

An interesting point was made in television discussions following this incident. People are still willing, nay compelled, to click on negative links and titles. They still buy the newspapers and subscribe to the media shows and social media news, in spite of the terrible content which is delivered.

The ordinary 21st century person is enthralled with horrible, detrimental, nasty and negative subjects. There are even more negative words in our vocabulary for us to choose from when making our hate comments. How can we drag ourselves away from this?

It's time to take a step back and look at ourselves. Stop reacting on impulse to whatever we have just read, heard or watched.

I know we live in a world when everything needs to be immediate, tasks need to have been done yesterday and any kind of delay is intensely irritating. We have lost the power of patience. The British used to be experts at queuing and being polite. What has happened to this?

Technology has allowed us to instantly respond. It has become normal to show our appreciation or disgust. And unfortunately disgust is more prevalent in hate comments. Many people take on troll-like tendencies and criticise even the tiniest point because it doesn't match their considered perfection.

Where is our tolerance? The ability to bite your tongue and give yourself time out to calm down is evaporating fast! Who really stops and thinks about the effect their negative comment will have on those who receive it?

There is even a TV advert about a girl who changes her comment about her friend's new hairstyle from a negative to a positive one. The ad even shows the implications that arise from doing so. Any snide comments about her friend's fringe would have far reaching consequences which would have been more than just losing a friend.

Start being kind instead

One of the reasons why Caroline Flack took her own life was because of her mental health. It's not easy being a celebrity. There are huge demands put upon you which are extremely stressful to fulfil.

However, I'm sure a constant flow of negativity wouldn't have helped if you are wavering on the brink of depression. Being bombarded with hate comments is the last thing you want.

But these despicable and psychopathic people who continuously trolled her had no intention of understanding her situation. They had an axe to grind, never mind the implications this caused. To them Caroline was invincible, an empty shell with no emotions, her celebrity status protected her from any negativity thrown at her.

But this isn't true – not for anyone, let alone Caroline. Many successful people are experts at hiding their emotions. It's not good to be seen weeping, you have to plaster on that smile however you feel.

One tweet I saw said "Just because a person carrys it well, doesn't mean the load isn't heavy. Be kind always." And that's just it! We need to start being kind – always!

Ramp up the positivity

Positivity breeds kindness. Consideration. Understanding the other person's reactions, emotions, point of view. This is an anathema to a troll. But it shouldn't be for the ordinary, everyday person!

What we really need is some sort of crisis, where everyone comes together and pulls their weight. A bit like all the flooding that has happened in Wales, Yorkshire and the South West this winter. But this needs to have a much wider spread.

Just like the floods, there is the potential for loss of life. The situation for these people has become untenable. Something needs to be done to prevent this catastrophe from happening again. But it needs everybody to stop writing hate comments, not just a few.

The general way of thinking needs to change. We need to stop and think before we publish. Try to curb our impulsiveness and consider the other's point of view. Be tolerant of and appreciate differences and rather than wanting to destroy them.

And above all we need to understand why we should do this. We need to see the mess we're in and be shown the way forward to rectify this. We need to be given guidelines in how to behave properly: be kind, considerate, forthcoming, appreciative, positive.

And if you want to know more about this, then take a look at my 'How to deal with a troll' e-course. This is much more than just sorting out trolls, I have a large section on negativity as well, not to mention my underlying message throughout: be kind and positive – always!