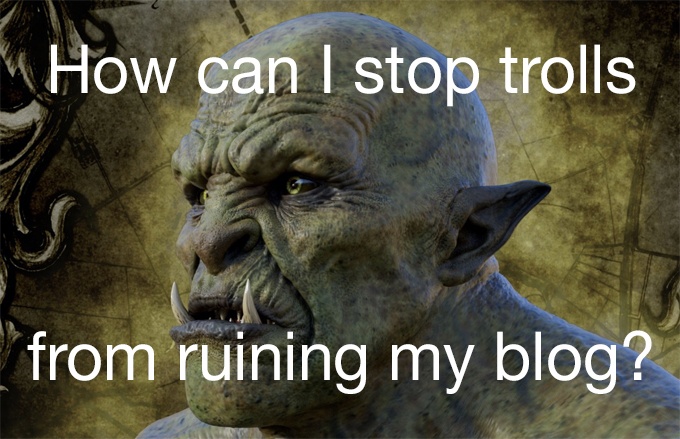 It's a sorry world when we have to stop trolls from ruining our blogs. What is it with people who feel the need to be constantly horrible all the time?

These may be very sad individuals, but they're not as uncommon as you may think. I met a girl on a train who told me her uncle went on a trolling spree whenever he felt bored. I was appalled, but she wasn't.

In a world of free speech, which has now converted to written comments, there is little regulation to actually attempt to stop trolls unless you take action. This infographic will give you some ideas:

Blogs have the advantage that they moderate their comments. This is not so, or less likely, on social media. Social networks have some sort of moderation system in place that goes so far, but usually not enough. Many trolls manage to slip through the net.

But you're in control on your blog. If you are tormented by a troll, who has decided to vent his fixation on what you write, you have the ability to make his life as hell as he makes yours.

The first thing to do is to spam his comment. Then delete his comment from the spam folder. This activates the spam blockers of his details, which gets added to their databases and prevents him from commenting on other blogs.

If this doesn't work, you can physically block his IP address like a spammer. In fact, trolls should be treated as articulate spammers who are equally bent on destroying a blog.

There is a section within the Discussion Settings where you can enter the miscreant's IP address. The commenting system will then stop trolls or anyone with those details from contributing to your blog.

Just like spammers, persistent trolls may change their IP address by moving elsewhere to comment, but at least this prevents them from trolling from their own home or favourite cyber café.

Another tactic is to totally ignore them. This may be easier if you already get lots of really helpful and kind comments on a regular basis. These can easily drown out the horribleness of the troll.

But if you're starting out and are desperate for comments, getting a troll can be a horrific experience. You will need to instantly develop a thick skin, necessary if you blog about certain subjects, or you match the criteria the troll is aiming at.

It may take time to build up your troll resistance, so get a friend to help moderate your blog's comments, or those you get on social media, until you feel you can cope again once more.

Get your friends to help

Your regular readers and commenters on your blog can help you stop trolls from being a nuisance too. In fact it's a good idea to involve your fans to make them feel special and welcome within your community.

Any loyal commenter worth their salt will automatically be incensed by trollish behaviour. However, if they want to intervene to help you, it might be a good idea to set some ground rules beforehand in the form of a commenting policy.

This means everybody will sing from the same hymn sheet, and your collective attack on the troll will be more forceful, meaningful and powerful. They will make them feel outnumbered, causing them to eventually slink away.

The main food for trolls is emotion. It is their main trigger to start their trolling pursuits in your direction. They are very good at picking up on weaknesses, emphasising them to get them all out of proportion.

They are also stimulated by personality. As they have little of their own, they are naturally drawn towards a lively blogger to make fun of the way they are. They delight in picking holes in anything they don't have or are missing out on.

Some bloggers write to express themselves on a particular theme. This particular kinds of posts may not be able to stop trolls from attacking them, as the emotion within them fuels their fire. If you are such a blogger, be more aware of how your writing could inflame a troll.

It's definitely not worth getting angry with a troll, or about trollism in general. They are unfortunately a fact of life, highlighted by some very eminent figures in society who have very little social graces when it comes to communicating on the web.

Just like emotion, anger is sustenance for a troll. They thrive off getting up your ire, provoking you with clever words until you are beside yourself. This is a totally enjoyable pursuit for them, whereas you'll be getting more and more miserable.

You will never win an argument with a troll. They are always one step ahead, brimming with cunning phrases which stoke up your anger. They know how to get inside your head and play with it. The best thing is to keep your calm and stay out of trouble.

Back up with evidence

Once I managed to beat a troll. (Actually I didn't realise he was a troll until much later.) He wasn't a very clever troll, and said some very stupid things which I thought were frankly ridiculous.

I combatted him with facts. He didn't have any to fling at me in return. I piled more and more on until he couldn't win the argument. Victory was ever so sweet!

Having a suitable resource for evidence is a good way to stop trolls. They rely on emotions, whereas you reinforce yourself with data and numbers which they cannot dispute. Eventually they will realise this is a losing battle, and will retreat with their tail between their legs.

To summarise, avoid stimulating a troll with emotional content. Choose your subjects carefully if it seems to be attractive to trolls. Be careful when expressing your personality if this is annoying to a troll who may come across it.

Some people will always be prone to troll attacks. Usually success in communicating online with a high readership is distasteful to trolls. They hate anyone being better than them, as it highlights their own inadequacies.

However, I wouldn't stop saying what you want to say because of the threat of trolls. You may be lucky and never encounter them. But if you do, immediately put the necessary safeguards in place to help stop trolls from giving you a hard time.

How do you stop trolls from ruining your blog?

Have you ever had a troll attack? What did you do about it? Do you have any tactics or useful tips to share about coping with trolls?

And if you know more about trolls than I've mentioned in this post, why not write a comment to fill in the knowledge gaps. We would all love to know how to stop trolls from ruining our blogs and how we can interact and engage on the web properly without attracting them.